Ansible is an open source community project by RedHat and is the simplest way to automate your IT. Ansible can be used across entire IT teams, ranging from systems administrators to network administrators to developers and managers. Ansible provides an enterprise-ready, task-based, agentless architecture automation solution for not only servers and software, but also networking starting in Ansible 2.1. Further, the Ansible backend makes extensive use of Python. Cisco is a major supported vender. Ansible modules supporting Cisco ACI were added in Ansible 2.4.0, with additional modules available through Cisco's DataCenter GitHub.

Return to your Terminal window and re-activate the virtual environment for the requests library to use what was previously installed.

Like PIP, Ansible requires the Extra Packages for Enterprise Linux (EPEL) to be installed, thus, you must first sudo yum -y install epel-release on CentOS, it's just ready to install on Ubuntu, or pip can be used. Install Ansible via pip:

Verify Ansible was installed by checking the version. You'll be working with the latest Ansible release, Ansible 2.7.6.

Upon a successful installation and verification of the Ansible version you're output should look as follows:

Ansible calls it's configuration and orchestration framework "playbooks" and is a collections of "play(s)" or tasks for configuration management and deployment to a device or multiple devices in a synchronous or asynchronous fashion. While playbooks can be represented as a single file, Ansible best practices recommend a particular directory structure for playbooks that we'll be building below. This directory structure lets you organize files into smaller configuration files for better reuse, particularly into "roles." Roles in are Ansible are a way to automatically load certain variables, tasks, etc depending on a categorization. A role can be defined for example by device type. Before creating the configuration tasks using Ansible modules, lets create the appropriate directory structure.

We're going to use Ansible Galaxy to create our roles within the roles directory. Ansible Galaxy is the official community for downloading or creating roles.

Under the majority of the role directories you'll notice a ".yml" file. Playbooks are written in a very simple markup language called YAML, which stands for Yet Another Markup Language. YAML is used as it's even easier to read than data structure formats such as XML or JSON that we've previously examined.

YAML files optionally begin with --- at the top of the file to signify the start of the file. Following the file start, comes the Ansible modules written in YAML syntax. YAML syntax for Ansible modules are expressed as a list of key/value pairs. Much like you've dealt with key/value paris thus far in this lab, this is a dictionary. A list simply begins with a "- " (a dash followed by a space) while as in previous examples, dictionaries use ":". Below you can see an example of YAML syntax that contains a list of dictionaries and where the dictionaries contain lists:

Ansible allows you to define and reference variables in your playbook tasks using Jinja2 templating; a templating language for Python. A YAML gotcha for Jinja2 is that if you start the line with a Jinja2 templated variable, for example the above, then the entire line must be in quotes. Variables can be defined in various locations and Ansible has a precedence system for understanding what and when a variable would be overridden if used in more than one location. The precedence for a variable can be seen below. As an example, a variable in the role defaults directory would be overridden by a variable in the playbook global_vars/all directory and file. Further, both of these are overridden by the local vars directory within the specific role, role vars.

As an example, each of these network modules have basic requirements for arguments to access the device, albeit, some of these parameters may not apply to the network operating system you work with:

By default, the transport for all modules is set to use the "cli". The Ansible ACI network modules do not make utilize the cli, but rather replace the transport with protocol; either http or https. A username and password need to be specified per task as well; much like when a request was preformed in Postman or Python.

Copy the below YAML into the your Terminal window to create the all file in group_vars and populate the contents of the file for the ansible_connection, username, password, and protocol to be used in the ACI tasks. group_vars/all is where you place universal variables that apply for all devices.

Copy the below YAML into the apic role vars directory main.yml file. Remember, each of these are a dictionary with key/value pairs or a dictionary that contains a list of dictionaries.

The Ansible ACI Network modules you'll be using for this section can be found below. These will be used to introduce you to Ansible tasks to create your own Tenant, VRF, BD, AP, and EPG.

Again, you will leverage a pre-existing Tenant, that your user has access to. There is however a Tenant module available:

Copy the tasks below to create your Tenant and the before mentioned constructs:

Ansible refers to it's host file as an inventory file. The inventory file has a default location in /etc/ansible/hosts, but can also be specified directly within a playbook locally and used with the -i hosts option, where hosts happens to be the inventory file name. Within the inventory file, you can simply list all the devices/hosts or make use of group names using brackets which classifies devices you are controlling at what times and for what purpose.

Copy or type the below inventory host file.

As previously mentioned, Ansible calls it's configuration and orchestration framework "playbooks" and is a collections of "play(s)" or tasks for configuration management and deployment to a device or multiple devices. While playbooks can be represented as a single file, Ansible best practices recommend a particular directory structure for playbooks that you built using roles for better organization and reuse. You built all of this over the last three sections. You now need to build the main playbook file, which would look like the below:

The below playbook file you will use for this lab designates the following behaviors, for each role ‘x’:

Alternatively, you can add -vvv for verbose debugging output for each task that is executed.

Upon successful execution of this playbook, you will have a Tenant with a VRF, BD, AP, and EPG deployed to the ACI fabric using Ansible. Feel free to login to the APIC and verify.

If not already from the previous section, login to the ACI fabric using your user, aciproglab04, and password, cisco.123. Click Tenants, then ALL TENANTS. In the Tenant view, locate your tenant: . Double click your tenant to navigate to it. 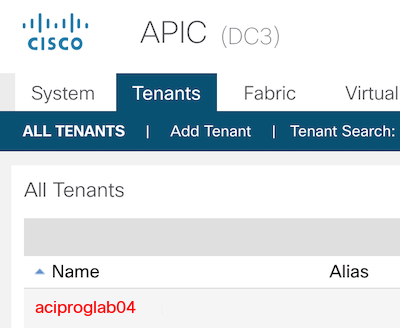 Expand the menus to verify the VRF, BD, Application Profile, and EPG created.